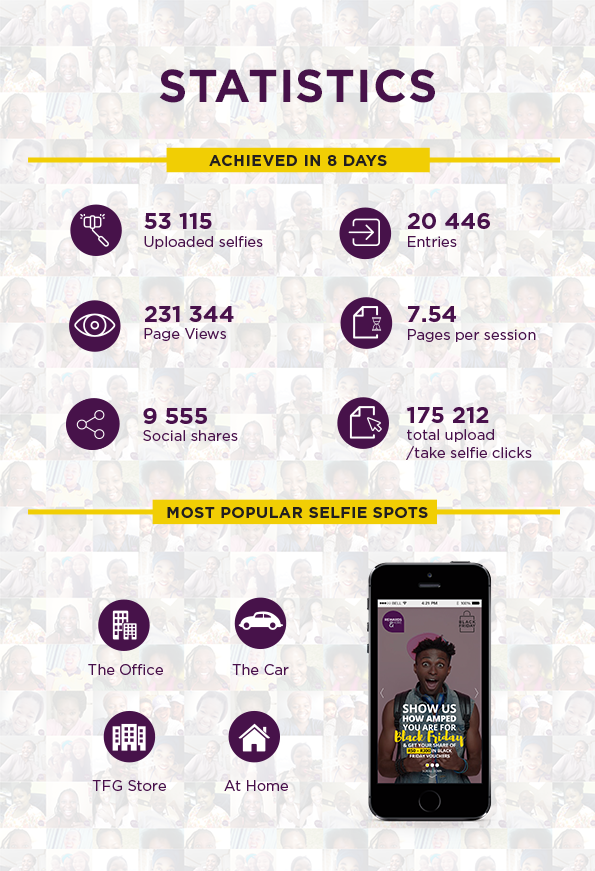 Think facial recognition is futuristic? Think again. Born from a creative brainstorm around how to drive excitement around The Foschini Group’s Black Friday promotion, Techsys was up for the challenge. We conceptualized the idea - “Show us how amped up you are for Black Friday and be rewarded by Rewards & More!” in which our emotion API would analyse uploaded selfies and award users a score based on their happiness levels, and be rewarded with a voucher – valid both instore and online on Black Friday.

Built on a mobisite, all users had to do was take a selfie of their most ‘amped up’ face. The bigger the excited filled grin, the more they would be rewarded. The emotions that can be detected are anger, disgust, fear, happiness, neutral, sadness and surprise.

With Black Friday gaining popularity in South Africa, we knew the technology would be an engaging way to generate positive sentiment around the TFG Rewards & More programme. The campaign ran for only a week and the results were outstanding, with 53,115 selfies uploaded and 20,446 total entries!

Engagement was massively HIGH with people uploading multiple images, which shows people LOVED playing the game. A great deal of traffic came from Facebook and Twitter where the game was shared 9 542 times in total. The session duration was at an average of 7:05 minutes and the page views amounted to 231,344 which indicates that consumers really enjoyed interacting with the campaign.

All in a day’s work here at Techsys – we’re feeling pretty amped, how about you?